WHATS GOING ON in the gardening world?

Here you can check out the happenings of other clubs. See their events, meetings, etc.
Click on any event on the calendar for more detail.  Or, Click on a Club/Society above for more information and links to websites.  Want your Club here -- click on 'Contact' on the menu above.

What's New?  See articles below calendar and check the Bullets in white

Duckweed with Nymphaea 'Helvola' in a container water garden

Common duckweed, a tiny free-floating aquatic plant, receives little if any attention as a plant for home water gardens but it deserves some.  Most often duckweed is thought to be algae when it blankets stagnant or slow-moving waters.  This humble little plant is more than that ‘green’ stuff seen on ponds.  In colonies, it shades the water, absorb harmful nutrients and is a high-protein source of food for waterfowl and fish.  It is also used in pharmaceutical research, eaten in Southeast Asia and is an aquarium plant.

The petite plant is a flat, single, oval-shaped leaf or frond less than a fourth-inch long.  Each leaf has an air pocket for floatation and a wee root.  It is native to much of the world, growing in both sun and shade and as far north as zone 4.  The USDA US Forest Service website says duckweed has the smallest known flower.  While rarely seen, the flowers attract flies, mites, small spiders and even bees.

Duckweed may be a native but it quickly spreads.  It reproduces rapidly by division in nutrient-rich water and is difficult to control if left unchecked. Dense mats covering a pond for some time can lead to oxygen depletion and fish kill.  An environmentally-friendly suggestion for removal is to wait for the wind to blow masses of the plant to the shore and net.  Aquatic birds and mammals, reptiles and amphibans spread duckweed from one quiet body of water to another as they move around.

Due to the rapid growth of duckweed, scientists and researchers are turning its invasiveness into a positive.  It is used for bioremediation of waterways with excessive amounts of phosphorus and nitrogen from agricultural runoff according to the Forest Service website.  When harvested, it is used as livestock feed or fertilizer.  Techniques are being developed to use genetically modified duckweed in creating biomedicines.  The website explains plants are immune to animal viruses, making them especially valuable in this research. 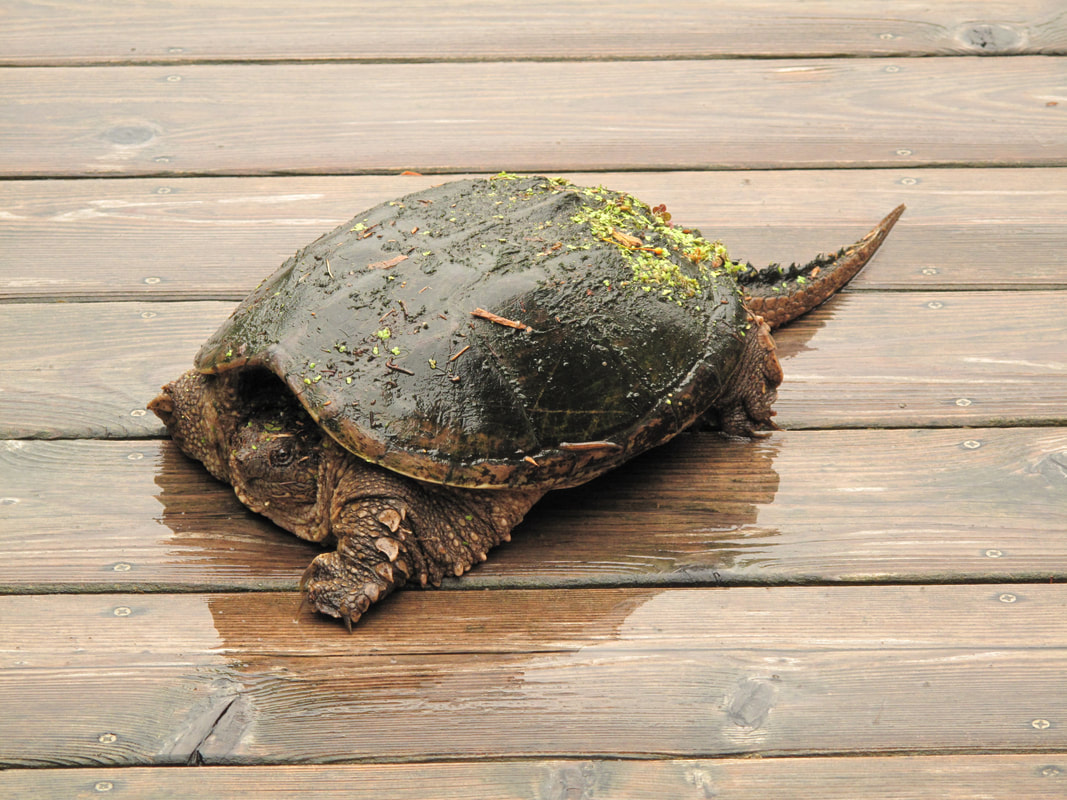 ​     Now a few words about duckweed as a plant for water gardens, especially small ones.  I add a thimble full to some container water gardens in late spring.  It multiplies.  Small clusters gather around the small waterlily pads and flowers and snuggle into the base of the upright foliage of a marginal plant(s).  When it becomes overly aggressive, I simply remove a handful or two and feed it to the water garden goldfish or compost.  It is the perfect size accent plant for a small container.

Duckweed is sold.  I did a quick search of a few aquatic plant websites and found a 4-ounce containerfor $6.95 and one-half pound for $13.95.  I called a local aquarium store and for $9.99 I could buy a generous handful.  I get mine from the natural pond in our front yard.  There is probably a pond in your neighborhood?  Removing native plants from their habitats is illegal or at least frowned upon but would a few duckweed plants be missed?

There are  hundreds of waterlily varieties in the aquatic plant group - emergent with floating leaves.  Nymphaea ‘Chromatella’ and N. ‘Helvola’ date back to the late 19th century, the beginning of modern-day hybridization of hardy waterlilies by the French plantsman Joseph Bory Latour-Marliac.  These two early hybrids are half siblings, sharing the same pollen parent N. flava, (known as N. mexicana today), the North American yellow waterlily

Nymphaea ‘Chromatella’
This sunshine yellow waterlily has classic cupped-shaped flowers three to five inches in diameter.  The green pads have bronze mottling.  The foliage stretches out four- to six-feet over the water’s surface making it a medium size waterlily.  I grew it in a half barrel before I had an in-ground pond.  It seemed happy enough but it displays better in a ‘real’ water garden.  All waterlilies like full sun, six hours or more, but this one is OK with three to four hours of direct sun, hopefully it basks in that sun over the noon hour.

I plant it in a two-gallon container with good garden top soil.  In full sun, I position the container in the water garden so there is about 12-inches of water over the top; in less sun, approximately eight inches.  Bricks or overturned flowers pots are examples of what can be used to adjust heights.

Latour-Maliac introduced this hybrid, his first, in 1887, sending it to the Kew Gardens in England.  N. ‘Chromatella’ was his first big hybridization success.  The name of this lily is correctly written Nymphaea ‘Marliacea Chromatella’ but most often N. ‘Chromatella’ 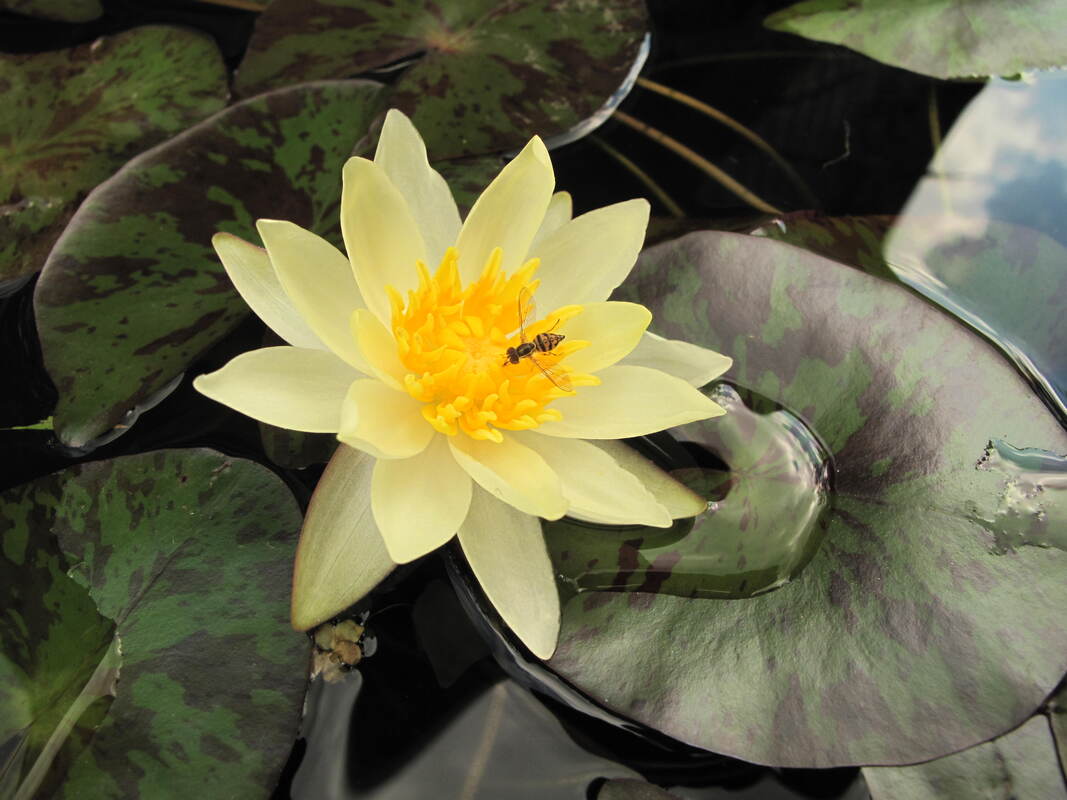 Nymphaea ‘Helvola’
This yellow cultivar has star-shaped flowers the size of silver dollars.  They sit atop small heavily mottled pads.  Its dwarf size makes it ideal for a tub garden.  It likes full sun but also tolerates part shade.  This mini opens later in the day than most hardy waterlilies, around noon, and stays open until about 5 p.m.

I generally plant this lily in a six- or eight-inch bulb pan in garden top soil.  I like six- to 10-inches of water over the top of the plant, the lesser amount if in part shade.  Once it starts to bloom in late spring this waterlily flowers non-stop until fall with more than one flower open at a time.

These hybrids were two of eight that Latour-Marliac entered in the World Exposition in Paris in 1889.  The collection captured first place in its category.  Both are recipients of the Royal Horticultural Society’s Award of Garden Merit.

N. ‘Chromatella’ and N. ‘Helvola’ are oldies but goodies.  Both are great choices for beginner water gardeners and those experienced.  They are good bloomers, reliably hardy, will tolerate less than six hours of sun and have lovely pads to compensate for fewer flowers when grown in part shade.  I consider these two antique hardies must haves, one for my in-ground water garden and the other for a container.  They are winners!!    ​

Create your own unique website with customizable templates.
crosspollination